White can be an awkward colour to paint. So a step by step guide – plus, a bit about spot colours. 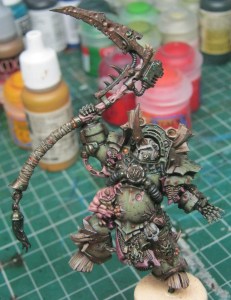 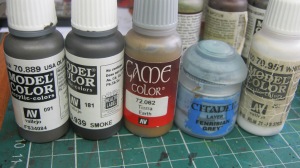 Wash all over with USA Olive Brown: 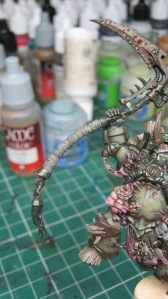 Wash the recesses with Smoke:

Add white to the above mix: 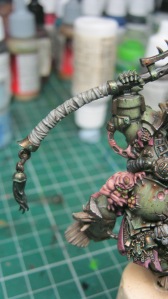 Add more white to the mix: 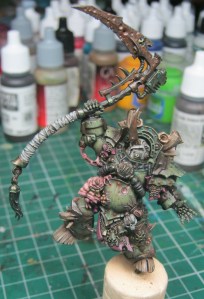 I avoided taking this up to pure white, as the helmet should be the focal point of the model – and so needs to be slightly lighter in colour than any other white areas.

It also looked a bit clean for an ancient set of bandages – so I shaded them down, with washes of brown/ochre: 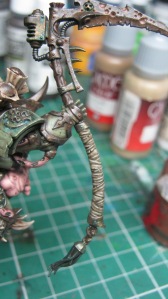 I thought painting it up as a regular scythe looked slightly bland – so I turned it into a deamonic weapon. Painting the wooden area up as flesh; with eyes on one side of the handle: 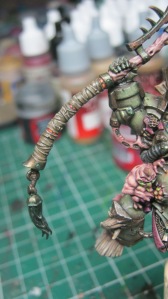 And an unhealthy green glow on the reverse: 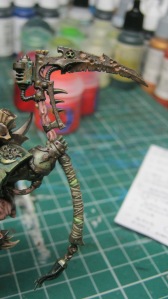 White was the spot colour on this model. But it kind of involved breaking the rules, really.

A spot colour is intended to make the model look more distinct, by contrasting with the main colours of a paint scheme – which usually compliment each other.

However, in this case, that was the green armour and the fleshy pink – which are polar opposites. So white was a neutral shade, falling between the two.

It’s usually best to imagine a triangle shape before placing the spot colour – such as the head, and the two hands. In this case, it was the helmet, the skull, and the bandages on the scythe. 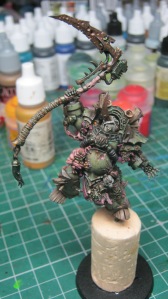 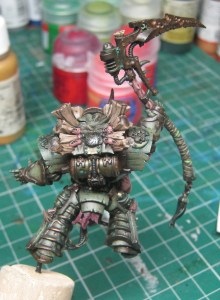 It’s not life-changing information – but it may prove helpful, when planning-out painting in the future.

The Typhus model is very elaborate, so it’s best to start by reading through the assembly instructions before removing any pieces from their sprues. Kits like this are easily botched, otherwise.

Once parts have been snipped off, they invariably have mould-lines and unwanted bits of plastic sprue still attached to them. These need scraping away with a craft knife, and filing down carefully with a needle file:

It’s virtually impossible to get rid of these entirely – it shouldn’t matter too much, though; as any which really can’t be removed can be painted up as battle-damage.

Typhus is also a fiddly model to construct – if its glued together at this stage, some details would be unreachable with a paintbrush. Which is why it is helpful to test-fit the pieces, using blu-tack:

As you can see, the swarm of flies obscures most of the model’s back:

I left the flies off, for the time-being. Paint makes plastic glue ineffective; so I placed blu-tack over the parts which will need gluing, and had to remain free from the spray paint, when undercoating the miniature:

Once you’ve found the areas which are likely to be obscured, you can glue the rest together; and leave it to cure. With plastic glue, it’s best to leave it overnight.

I also drilled a hole in the foot, so that a piece of wire can be inserted later – meaning the model can be held easily while being painted:

You can buy fancy painting handles, but it’s easy enough to make your own by super-gluing corks to old plastic bases:

This is the patented Hull Warhammer & Stuff deluxe version – featuring a natural texture, for an enjoyable finger-hold experience. It can be placed upright or horizontal, for ease of storage:

Anyway, before undercoating the model, wash it in warm water with a small amount of shampoo added; and leave the pieces to dry on a piece of kitchen towel:

It can then be undercoated: 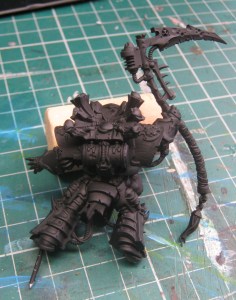 And attached to the cork:

This series of posts will go through the steps of painting character models – building on the methods and techniques used to paint the death guard army, last year.

Because special characters tend to be centerpiece miniatures, they benefit from more detail and attention than rank and file figures require.

It also aids their characterization to create thematic bases.

So, over the next few posts, I will cover these aspects. From prepping models, to more advanced painting skills – like blending, weathering, and using spot colours.

I will also try to make a tutorial on basing – but I haven’t figured out a design yet.

Although this model is plastic, and shouldn’t need any pinning – it can be helpful if you’re going to undertake conversions.